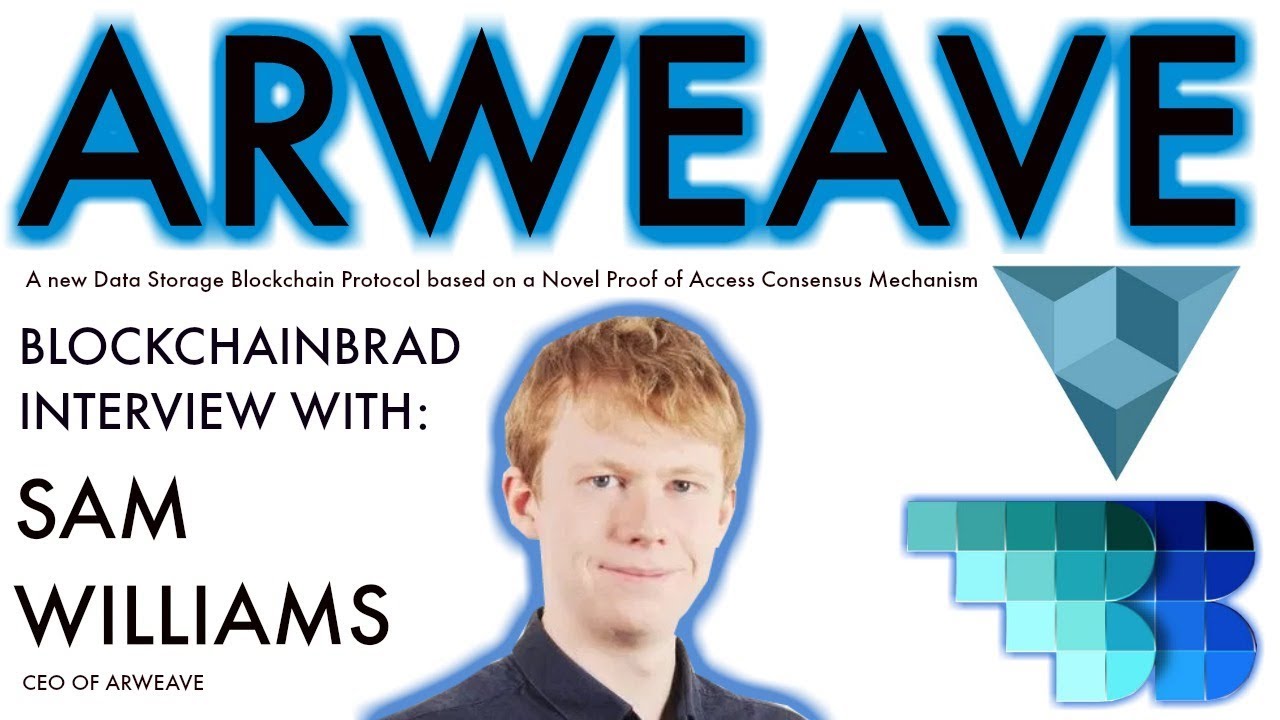 BlockchainBrad speaks with Arweave CEO Sam Williams for an exclusive update. Why? Because Arweave has built a new data storage blockchain protocol based on a novel proof of access consensus mechanism that creates truly permanent data storage for the first time. Now data is finally permanent, low-cost, and truly censorship free. The Arweave Team are building the new backbone of the D-Net.

The Arweave Protocol
Arweave is a new data storage blockchain protocol based on a novel proof of access consensus mechanism.

The Blockweave
The blockweave is a new distributed ledger, its technological innovations elevating it beyond current blockchains, and positioning it to become the backbone of the $3 trillion data economy.

The blockweave revolutionises the traditional, useless, high-energy output of typical blockchains. The Arweave is based on a new consensus mechanism called ‘proof of access’, which instead of producing the negative externality of high energy consumption, produces a positive externality; that of low-cost, permanent on-chain storage for the very first time.

High Transaction Throughput
The blockweave has radically improved the way transaction speeds are computed on a decentralised blockchain. Years of research has paved the way for what we call ‘block shadows’, which allow the weave to reach speeds of 5000 transactions per second.

Simple Decentralised App Development
From day one we have focused on making it as easy as possible for developers to adopt and build on top of the blockweave. As Arweave is built by developers for developers, we have created our own REST APIs, allowing builders to create Arweave apps in any programming language they desire. This has allowed the Arweave development community to start building apps even before our mainnet launches.

Self-Organising Network
The Arweave introduces a new self-organising decentralised algorithm (‘wildfire’) that allows the network topology to adapt autonomously to the most efficient routes of information distribution. The Arweave self-optimises for low-latency, high bandwidth data writing and recall.

●▬▬▬▬▬▬▬▬▬▬▬▬▬▬▬▬▬▬▬▬▬▬▬▬▬▬▬▬●
PAYMENT/DONATION DISCLOSURE:
This was 100% free and I received no financial compensation for doing this video; not in fiat, tokens or any form on payment. Since several months ago, I decided to do only free content unless legitimate ambassadorships were involved. I believe that sponsored content is not a problem if disclosed, but this was NOT sponsored and there was absolutely no compensation received in any way, shape or form for this interview.

●▬▬▬▬▬▬▬▬▬▬▬▬▬▬▬▬▬▬▬▬▬▬▬▬▬▬▬▬●
GENERAL DISCLAIMER:
The information provided is not to be considered as a recommendation to buy or invest in certain assets or currencies and is provided solely as an educational and information resource to help traders make their own decisions. Past performance is no guarantee of future success.

BlockchainBrad shall not be liable to the participant for any damages, claims, expenses or losses of any kind (whether direct or indirect) suffered by the participant arising from or in connection with the information obtained this website or directly from the website owner.