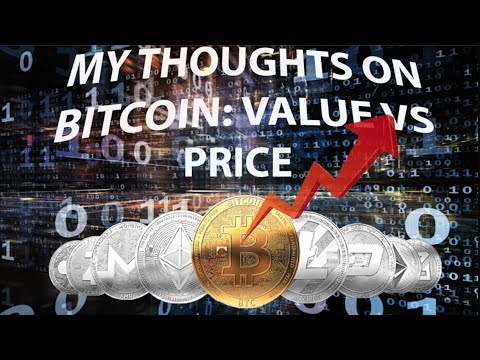 Perhaps I should be framing this opinion piece with my motivation behind creating it.
Here’s the deal, I’ve heard some say that Bitcoin could one day replace the USD as an international form of settlement. And that this is what will ultimately lead to one bitcoin being worth $1 million dollars (insert Dr. Evil impersonation here.)

It’s great that this form of value transfer has achieved such high price appreciation over the years and is being predicted to continue into the future, but I think it’s important to differentiate between the price of Bitcoin and the value it holds.
Superficially, this concept of value versus price is always something to keep in mind if you choose to invest in something like Bitcoin.

But I want to challenge you to think deeper on this concept.
I say this because we’re now entering a stage of adoption and usage that has already gained the attention of governments around the world. We are now transitioning out from being an underground movement of cryptographically secured, financial freedom and we’re now moving into a time where big players have their eyes on it and those who are a part of it.

We’re entering a time where the true backbone of Bitcoin and cryptocurrencies will be tested.

How many people have been saying that now that the governments are trying to tax and regulate cryptocurrencies, they are now officially legitimate? I’m sure the orthodox Bitcoiners out there shudder when they hear this, but this is the truth of the masses. They follow what is deemed legitimate by the “powers that be”. We’re going to have to come to grips with the fact that the masses aren’t necessarily masses of anti-governmental anarchists, or even people who particularly recognize how this new digital money can fully affect their lives.
They could, if they can properly experience financial freedom that Bitcoin has to offer, but until then, these are the people we will need to educate and inspire in order to solidify the future of Bitcoin.

Without a doubt, I agree that Bitcoin will reach heights that right now might seem astronomical for those new to this space. It’s also important to pay attention to how this technology is disrupting the current systems. We’re seeing governments around the world either trying to regulate it, or implement their own cryptocurrency. We’re seeing banks first trying to demonize it and now exploring their own use cases for blockchain tech.

And then there are thoughts of the US adopting Bitcoin as a means of accomplishing international settlements. This could easily send the price of one whole bitcoin to $1 million. But it’s far more likely that the U.S. would instead create their own crypto to serve as a means for paying taxes. I personally have a hard time agreeing that a heavy handed government like the U.S. would want to adopt a currency over which they would have no centralized control. I’m pretty sure that would be a prerequisite for this to even happen. Furthermore, if this were to happen, you better believe the U.S. would work to centralize the crap out of it, thus destroying the very thing that we all value so much right now.
What’s the point of having $1 million Bitcoin if its essentially assimilated to the very thing it’s been designed to disrupt? I’m just going to leave it at that.

This brings me back to my point here today. The value of Bitcoin, what it truly represents, is so much more than just a new all time high.
It exists thanks to the countless hours volunteered by incredibly smart and motivated individuals who just wanted to change the way the monetary system could work. To give financial autonomy back to the individual.
Those individuals who were a part of sparking this whole new form of financial freedom and responsibility are people that deserve a whole lot of respect and appreciation. Many of them have chosen to remain anonymous, but I’m going to do my best in the next few videos to shed some light of a few of these individuals and what it was that motivated them to spark this epic new technology.