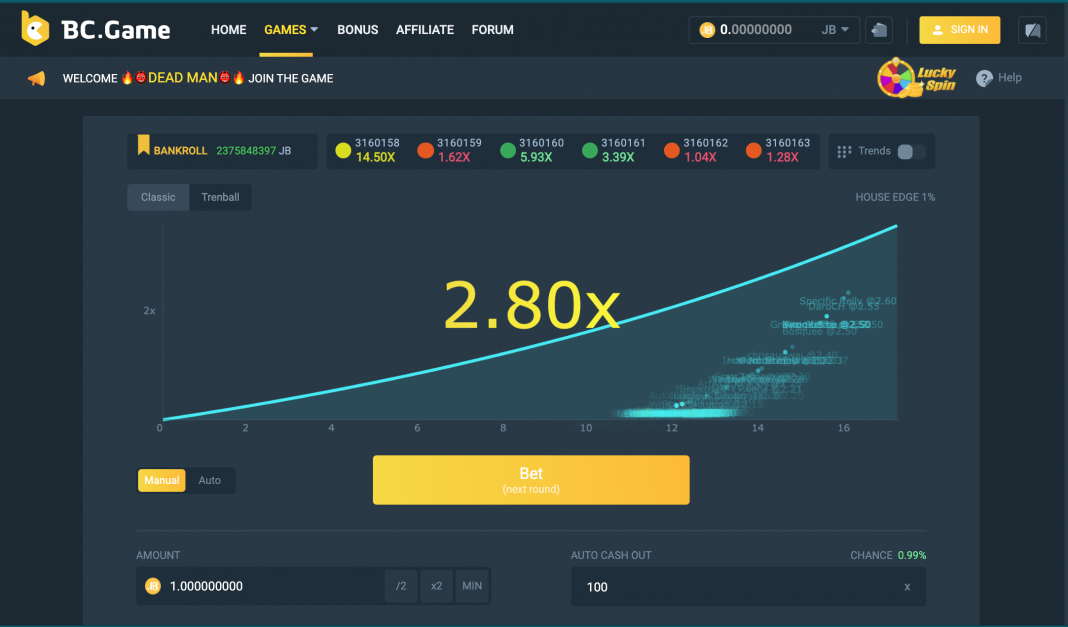 Bitcoin crash games were created not so long ago, by the premier casino site Bustabit. They’ve since become a pretty popular form of gambling, particularly among discerning crypto players. Crash game is pretty easy to understand – it’s a multiplayer game that features a constantly increasing curve, which increases the payout and can crash at any point. You have the chance to score some major wins, without having to have too much skill – making crash ideal for high rollers and novice gamblers alike.

How to Play Bitcoin Crash Online

The crash game at BC Game is a proprietary game – which means that it was made by the site, with software built in house. The game is totally provably fair and promises to exceed all of your expectations.

To play, you’ll need to place a bet. Then, watch as the curve meanders upwards and the multiplier grows. The exciting part about the BTC crash is that you can cash out at any point, and as long as the curve hasn’t crashed, you’ll win an amount of your bet x the multiplier. However, if the curve crashes before you take your winnings, you’ll lose the bet and the game.

Most proprietary crash games will have their own unique features that make them stand out. BC Game offers a provably fair crash game, offers huge wins, and has a house edge of 1% – making it relatively easy to beat the site.

BC Game has recently introduced a new version of the popular crash game – Trenball. In Trenball you bet on Red, Green, or Moon depending on what you believe the game’s outcome will be.

Red, Green, and Moon indicate where the crash will bang in the round. You win based on which of these options you place a bet on.

Should you bet correctly, your payout for each will work as follows:

To play Trenball, you need to know a couple of rules. Before each round starts, you’ll get 6 seconds to place a bet. Here, you’ll choose between Red, Green, or Moon. Once the 6 seconds are over, the game will start running until it “bangs” – or reaches the end of the round.

You can play BC Game’s Crash and Trenball games individually or simultaneously, it’s up to you!

Bonuses to Use on Bitcoin Crash at BC Game

It’s no secret that most players love a good bonus. Luckily, if you’re new to BC Game, you can score a bonus of 1 USD every 24 hours. Other bonuses include:

Daily bonuses are bonuses that you can score daily, and BC Game has quite a few on offer:

Now that you know how (and why) to play the Bitcoin crash game, let’s walk through the process of getting started at BC Game. You’ve heard about the bonuses on offer, but did you know that players who sign up and communicate in the chatroom are also eligible for a Rain bonus every 6 hours?

Playing crash at BC Game can be done in a huge range of different cryptocurrencies – not just Bitcoin. So, if you’re worried about finding a crash game in the digital asset of your choice, honestly you don’t need to look any further than BC Game. Players can play with BTC, SATS, ETH, XRP, DOGE, USDT, LTC, XLM, TRX, BCH, LINK, DOT, EOS, DAI, USDC, XMR, UNI, BSV, AVC, VSYS, LEND, MANA, BAT, ENJ, EURS, VNDC, NBX, and TRTL – making for accessible crash gaming at all times.

And then the wildly exciting range of games. All propriety, meaning that they were created specifically for the BC.Game platform and all provably fair, meaning that players can verify the outcome of any game immediately after playing. The range of games includes favorites like keno, slots, hash dice, the ever-popular blackjack, and roulette games, Plinko, video poker, wheel, and Hilo.