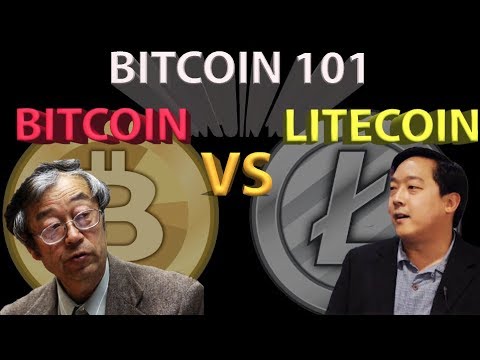 If you’re looking for an app that tracks the price of BTC & ETH and many other coins, check out the CoinView App: https://play.google.com/store/apps/de…

Bitcoin has open source code, meaning it’s open to the public to analyze and learn from. This has inspired a whole lot of people to take this code and tweak it in a way that they think will be most beneficial, resulting in a new cryptocurrency and blockchain.

One of the first of these people is Charlie Lee. So right off the bat, Litecoin has a publicly identified creator compared to the anonymous Satoshi Nakamoto. Charlie created Litecoin about two years after Bitcoin. And one of the ways that he chose to make Litecoin different is how Litecoin is mined.
Litecoin uses Scrypt mining. This type of mining can be thought of as ASIC resistant, meaning that it requires memory in addition to computing power, which is what GPUs are much better suited for. Litecoin was designed this way to purposely avoid the centralization we’re now seeing with Bitcoin and it’s mining pools.

Scrypt mining is still profitable for those who want to use their computers, unlike Bitcoin at this point.
But you know how those ASIC manufacturers like to innovate, there are ASICs for Scrypt mining now as well.

Regardless, this helps explain one aspect of how Litecoin can implement changes much faster and easier than Bitcoin.
Litecoin doesn’t have these huge, centralized mining farms like Bitcoin which have enough control over the network, like Antpool that allows them to strongly influence decisions like hard forks.

Bitcoins trouble with reaching consensus in regards to updates to the network can also be attributed to the sheer size of the network. Bottom line, Bitcoin has a lot of miners and nodes that need to come together and choose to signal one way or another.

Decentralization is great, and although we are increasingly becoming accustomed to instant gratification, this slow process of updates can actually help make sure that major mistakes aren’t made, and that the network has had ample time to consider the pros and cons. This is when Litecoin comes into play and can demonstrate how things like Segregated Witness and Lightning Network can work once implemented.
Litecoin often comes to decisions much faster because the network is generally smaller, with less developers and not as many powerful stakeholders (like blockstream) than Bitcoin, it’s easier for Litecoin to make decisions faster.

In addition to all of this, there are also some economic differences between Bitcoin and Litecoin. For example, the total possible supply of Litecoin is 84 million compared to the 21 million of Bitcoin. This sets the stage for overall more coins for Litecoin’s block rewards, and a less expensive price tag per coin.
Generally, the Litecoin network sees a bit more 10% of the amount of transactions compared to Bitcoin. The block times are a fraction of Bitcoin as well, which translates to faster transactions.
Getting back to the mining aspect of Litecoin, the difficulty and hash rates are lower so mining is actually more directly profitable for Litecoin.

Retire Rich And Early! Add Bitcoin In Your Investment Portfolio

Why Is Promoting Responsible Gambling Necessary?

Blogger Anon - September 27, 2021 0
Finding balance is essential in every activity you undertake. This need is heightened in activities like online gambling, where you can drive yourself off...

Everything You Need To Know About Pragmatic Play