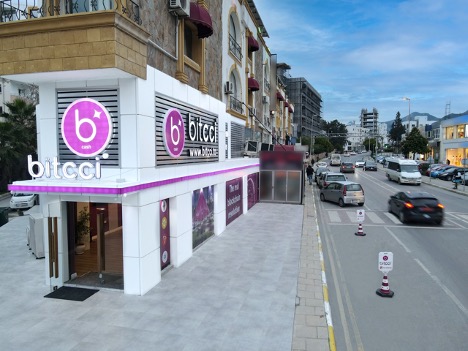 The Swiss startup “bitcci” has launched its first local token store in the heart of the emerging European crypto hotspot Northern Cyprus to market its own payment token “bitcci cash” to the general public. bitcci is a consortium of Swiss enterprises that is currently in the ICO phase and doing an IEO on several exchanges at the same time. The ICO’s soft cap of $5 million has already been reached.

“We have chosen Northern Cyprus as the location for our first bitcci Token store because in northern Cyprus we can observe a lot of high profile crypto investors, crypto-based Exchange offices, and very crypto-friendly surroundings. Citizens can buy even plots of land,  houses, cars & more directly with crypto in northern Cyprus.

The bitcci Token store is located on the main road at a high traffic circle, has 100 square meters of store space, and lots of international walk-in customers. The purpose of our token stores is to show the bitcci cash Token and its use cases to the public. We plan to open up the  next bitcci store in other locations soon.”

The bitcci ICO has raised over $6 million USD and attracted over 4,000 token holders until now. With approximately 8.5 billion bitcci cash tokens sold for 0.0018 USD a piece, the ICO is now 43% complete. The ICO will continue for another 25 days before all unsold tokens are burnt.

Cryptocurrencies are notorious for their anonymity, making them perfect for companies that value privacy. This is where the adult entertainment industry fits in. Blockchain has the potential to revitalize the escort and adult entertainment industries by providing a solution to the industry’s lack of transparency and decentralization. bitcci is a set of publicly traded firms based in Switzerland and Lichtenstein’s crypto valleys that will transform the sector.

Why could bitcci make a difference?

Adult entertainment is one of the world’s fastest-growing industries, with demand rising every year. As a result of this necessity, the sector is being investigated more closely in order to improve transparency and compliance with data rules.

The bitcci ecosystem has different companies and departments designed to ensure it is sustainable and achieves its intended goals.

bitcci has already started to establish the “bitcci Nightclub Network” and is prepared to buy land. The bitcci Nightclub Network is a worldwide network of world-class physical sauna clubs. bitcci plans to build the first nightclubs in Europe by the 4th quarter of 2022 as part of the first phase. After this phase, the company will expand to more regions globally.

The sex industry suffers a lot from rejection by financial institutes and banks.

The bitcci Bank AG will be founded in Q3 / 2022 and will solve this problem. The company will have a fully regulated banking licence and will provide professional financial services for all participants of the sex industry, like IBAN Accounts, Crypto Debit Cards, ATMs, and more.

The main purpose of the bitcci academy is to help sex workers to improve their lives and stay healthy, secure, and become wealthy and happy. The bitcci Academy runs the bitcci LIFE platform. bitcci LIFE is the next generation, blockchain-driven lifestyle program and wellbeing package for sex workers. It consists of modern infrastructure, professional services, trustworthy future planning, exciting education, inspiring teachings, and state-of-the-art online and offline tools.

bitcci.TV is an internet-based TV channel on which our anchorwomen present the latest news from the bitcci ecosystems and Blockchain news on weekly basis. The programmes are editorially prepared to appeal all partners of the bitcci ecosystem, Escort Girls, Customers, Investors, Affiliates, Marketing Experts, Exchanges, and Authorities. We have already expanded our existing team for our studio operations, content creation, guest interviews, interaction with viewers, etc. bitcci.TV will go live with its first Trailers in the First Quarter of 2022.

Bitcci portal and its App

The bitcci portal is currently under development, which includes “bitcci.com” and new live communication features such as chat, phone, and webcam with a fully integrated payment system “bitcci cash”. The bitcci.com portal and the bitcci app are expected to launch in Q2 2022, and bitcci expects to reach 1 million registered escort and adult service providers by Q4 2022.

bitcci also creates an API interface for government agencies. Regulators can use the interface to provide secure and real-time access to all data of escort providers in the bitcci ecosystem. This will enable the bitcci Group AG and the entire bitcci ecosystem to be recognized by the authorities as a professional partner.

The Payment Token “bitcci cash “ can be used as a currency to pay for all products and services inside the bitcci ecosystem.

The project makes use of blockchain technology to build a stable and secure foundation for the emerging global sex economy. Tokenization is the process of converting an asset’s rights into a digital ‘Token.’ Stocks, bonds, ETFs, and other financial instruments are examples of security. Rather than a “physical” document, the digital token “certifies” the asset’s ownership.

For more Information about the bitcci Token store and the bitcci ICO please visit: www.bitcci.to