The BC.Game Blog
Home Best Bitcoin Casino Cave Of Plunder, Everything You Need To Know 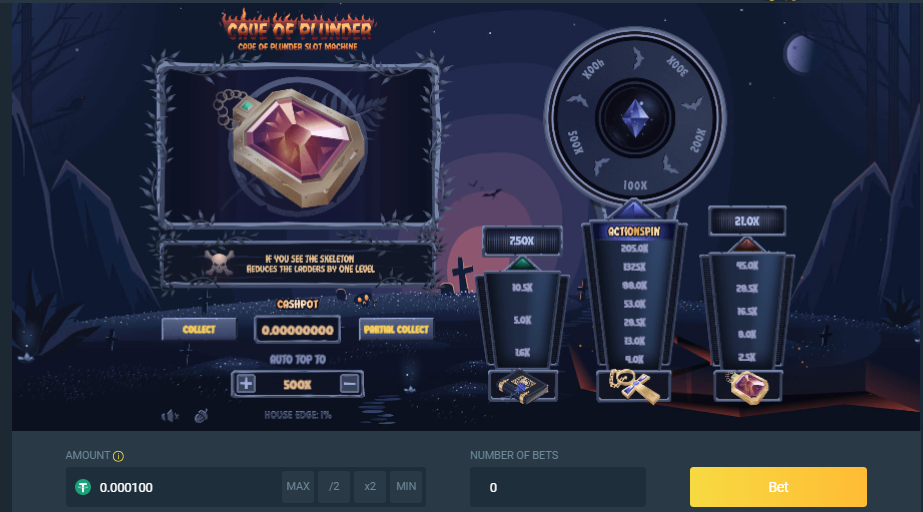 Before we get into the details, I want to shine some light on this slot’s 1% house edge. 1% is not uncommon in the world of crypto casino games. Especially, games such as Dice or Plinko. However, it is completely nonexistent in any other slots game. It doesn’t matter if it’s a physical slots game, or an online slots game. The average house edge on slots can range anywhere from 5% – 20%.

With a 99% RTP, and huge multipliers, BC.Game’s Cave Of Plunder provides players with many chances to win some decent profits.

Let’s take a closer look at the actual game itself. At the top of the center column, you will find a 500X jackpot. If you are lucky enough to make it to the top, you will have already collected several 7.5X and 21X jackpots on the way there. Is your resolve strong enough to reach the 500X or will you take the cashpot in fear of the pot stealing skull and crossbones?

The  slot machine is totally unique. Especially, among the cryptocurrency casinos. The game shows the player three columns of multipliers that lead up to the  Small (7.5X), Medium (21.X) and Grand(500X) jackpots. Cave of Plunder is a one line slot which is very common. However, its uniqueness comes from its one reel design.  On this reel there are 5 possible symbols. Three of the symbols adds to one of the columns to its corresponding jackpot. One of the symbols removes an entire row of progress towards all three jackpots. One symbol is blank and does not add or remove any multipliers. There is a “partial collect” option which awards the player a payout from the highest multiplier they have achieved on each column. Then an entire row of multipliers is removed. Similar to the skull and crossbone effect except this feature pays an amount determined by the current progress into the player’s balance.

The Book adds to the column with the 7.5X Jackpot.

The Amulet adds to the column with the 21X Jackpot.

The Cross adds to the column with the 500X Jackpot.

The Skull and Crossbones removes one entire row of progress from all the columns mentioned above.

The Choice Is Yours

Cave of Plunder offers an experience similar to that of “Crash” or “Moon” type games in that the player actually has the choice to decide if they want to collect their winnings or keep going in hopes of a larger reward. Most every other slots game available gives players faux control of the outcomes by allowing them to perform actions like stopping the reels when they want or by selecting from a grid of possible bonuses. The truth about those is, the outcome is already decided the instant you press the “bet” button. What will you choose while making your way towards the top of the Cave of Plunder?

Towers, Jackpots And A Cashpot

Each spin either adds, removes or does nothing to the “cashpot”. Every multiplier from each of the three columns adds to the single cashpot. The cashpot can be collected in full at any time or partially collected as explained above.  Each spin costs the player one wager. The wager amount can not be changed while there is an amount in the cashpot.

Collecting the cashpot is not the only way to be rewarded. Both the Book and the Amulet Jackpots are automatically awarded to the player’s balance upon reaching the top of their respective columns. These two jackpots can be collected an unlimited amount of times. Meaning, once the top of the column is reached, every time the Book or Amulet symbol appears on the real, that jackpot is again credited to the player’s balance until such time as a full cashpot collect is chosen or a Skull and Crossbones appears on the reel.

The Cross column jackpot is a bit different than the Book and Amulet Jackpots. At the top of the Cross column there is  a wheel with five possible multipliers. 100X, 200X, 300X, 400X, 500X. Once the top is reached the wheel spin is automatically triggered. After the Cross Jackpot is awarded, its column is reset back to the beginning. The Book and Amulet columns remain in their current positions even after the biggest Jackpot is awarded to the player’s balance.

Q: How is the game result generated?

A random number between 0 and 99,999 is generated using a provably fair algorithm. That process is described below.

The random number (between 0 and 99,999) is then matched to the probability table and the corresponding symbol from the table is the game result.

Q: How is the random number generated?

First, combine the server seed, client seed and the nonce to get the SHA512 hash.

We use the combination to compute the SHA-512 hash. This gives us a 128-character hex string: hash = SHA-512 (combination)

How to use the probability table?

If the middle tower reaches the top level, the first 10 characters of the SHA-512 hash value are converted into decimal numbers and modulo 5 to get a random number of [0,4], which corresponds to 100-500 times the prize in turn.