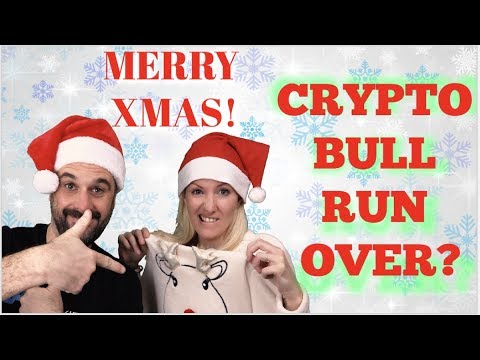 Join the New Kids On The Blockchain for the last edition of our weekly crypto and blockchain news show before Xmas. Can you smell the Turkey roasting, hear the sound of a rustling in your chimney? The sound of bitcoin tinkling in the wind ?

On this weeks show:

Is the crypto bull run over? , we chat to Filmio about their new blockchain based platform for content creators, share the third part of our series with Tax Token on tax minimisation and also chat to Jack from Pillar about how the launch of their much anticipated wallet has gone.

So we saw a much needed run up of the market this week much to the copy of all the bulls who have said this is it. Seems like today we have a drop back as seen here on Coin Market Cap.

Major cryptocurrency exchange and wallet Coinbase recently made what it claims is the largest transfer of crypto on record, a company blog post reports Dec. 19.
According to the post, 5 percent of all Bitcoin (BTC), 8 percent of all Ethereum (ETH), and 25 percent of all Litecoin (LTC), along with “many other assets” were moved to new cold storage infrastructure in what the firm “believe[s] is the largest crypto migration on record.”

Not the Christmas run we expected, but bitcoin has continued to rise, despite a bearish run that saw prices crash from $5,000 to an all-time low of $3,200. Asiff Hirji President of U.S. crypto exchange Coinbase said the current recovery is not surprising and the run should continue into the next year.

Speaking with CNBC’s Fast Money, Hirji was of the opinion that the market could go beyond its fundamentals, saying, sometimes “things are never as good as they seem and never as bad as they seem.”

Just days after reports arose that ConsenSys, the distributed startup that focuses on bolstering the Ethereum (ETH) ecosystem, was poised to lay off 50% of its staffers, firm founder Joseph Lubin has explained that contrary to community sentiment, all is well in the company’s camps.

In a flurry of tweets issued on Friday morning, Lubin, who once roomed with Mike Novogratz (CEO of Galaxy Digital), made it clear that his firm is far from dead in the water. The Ethereum co-founder stated that ConsenSys, headquartered in New York and backed by Lubin’s personal war chest, isn’t poised to fold. Far from in fact.

From Daily Hold Wealth Managers Are Buying Bitcoin and Crypto, but Won’t Advise Clients to Do the Same, Says Retail Brokerage CEO

Prash Puspanathan, CEO and founder of Caleb and Brown, one of Australia’s largest retail cryptocurrency brokerage firms by trading volume and number of clients, says dozens of financial advisors are using his service to purchase hundreds of thousands of dollars worth of cryptocurrency – while they offer no such advice to their clients. In an interview with Micky, Puspanathan says over half of his clients are from abroad, primarily the United States.
“These are wealth managers, who have their own personal cryptocurrency portfolios. They see value in it.”

On next weeks show we do a round up of the year so come and join us on a trip down memory lane and until then have a great Xmas!

Wealth Managers Are Buying Bitcoin and Crypto, but Won’t Advise Clients to Do the Same, Says Retail Brokerage CEO

With any film clips used or news stories featured we are NOT claiming ownership and the copyright remains with the owner.