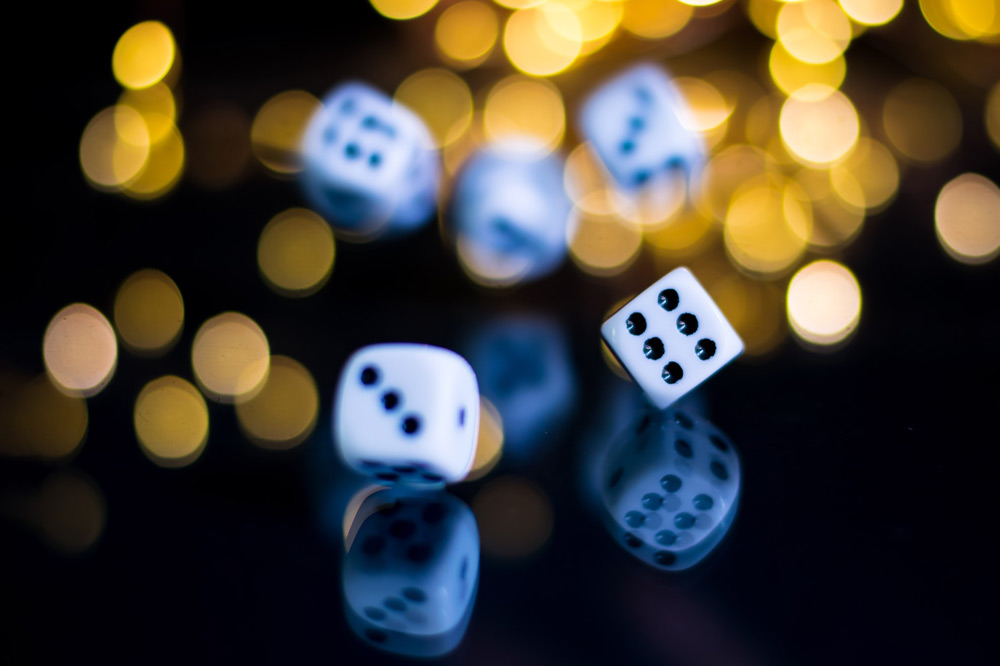 Shooting dice, also known as Street Dice or Street Craps, is a relatively simple gambling game that bears striking similarities to the casino game, Craps. The key difference between Craps and Shooting Dice is that you can shoot dice outside without using a conventional Craps table.

While shooting dice may not be on offer at the best crypto casino, it sure is a great option when you are outdoors and want to gamble for a bit of fun with some friends. The name – Shooting Dice – originated from the 1900s street gambling scene where dice was rolled on the sidewalks and streets for entertainment.

This street version of Casino Craps is much faster and only requires a solid outdoor surface and a pair of dice to get started. The goal of the game is for players to predict the outcome after they roll the dice or shoot. Participants of the game place their bets on whether the shooter – person in control of the dice – will roll a specific number. Let’s discover how to shoot dice and go through some of the rules!

Basics Of How To Shoot Dice

As mentioned earlier, shooting dice is very similar to Casino Craps, although the rules are slightly different. With that being said, having knowledge of the more complicated Craps rules doesn’t necessarily mean that you can shoot dice.

When it comes to shooting dice, you play with two dice that are shot by a single player at any given time. There can be an unlimited number of other participants who choose to bet on the outcome – the more the merrier!

The very first person to place a bet is the shooter, and all other participants must match that bet in order for the game to proceed. If the bet cannot be matched, the shooter must lower his bet and then proceed.

Whether you’re playing Craps or Shooting Dice, it can be quite a bother when people constantly ask what things mean in the middle of your gameplay. To avoid bothering other players when learning how to shoot dice, it is important to know what the essential terms are.

When the shooter doesn’t crap out or pass on the very first roll, that rolled number becomes a point. Under these circumstances, all the dice numbers become irrelevant with the exception of 7 and the point value.

At this stage, the shooter has to keep rolling the dice until it reaches either number. The pass bets here are based on whether the shooter will roll the point value again before rolling a 7 – the Don’t Pass bets are the exact opposite.

With reference to a point, the game ends once the shooter rolls a 7 or the point value.

The game begins when the players throw some money into the pot – known as ante up. At this stage, the players are paying in the hope of being considered as the shooter.

Once this is done, the next step is to roll the dice to discover who the shooter will be. All those players who chose to ante up will roll the dice, and the person who rolls the highest number will be declared the shooter.

After this, the shooter will then bet to either pass or crap out. The other players – now considered the participants – must now match the shooter’s bet and can then choose to place side bets. Any players who ante’d up earlier have the option of betting on the side or throwing in to match the shooter.

With that out of the way, it’s finally time for the shooter to roll the come-out – the first roll of the game. If the come-out is a crap-out or pass, the game ends and the bets are distributed accordingly. If it happens to be a point, all crap-out bets are considered bets on whether the shooter will 7-out. All pass bets made will then be converted into point bets.

If you happen to be the shooter or if you have plans to be the shooter, it is crucial to understand how to control your dice. Gamblers who play Craps or Shoot Dice can become impatient and nobody wants to get bored while the shooter sets his dice – the faster the better for everybody!

When learning how to shoot dice, a common habit with dice controllers is to start with the number 3 on top of both the dice – not necessary but an unwritten code amongst shooters so nobody gets suspicious and thinks that you are controlling the dice.

Besides the numbers that you choose to show, the dice can be both positioned in diagonal lines that show the three spots forming in alignment in the same direction. This takes some practice, so it’s best to try that out many times at home instead of mastering that art during a live gambling session.

When it comes to the actual shooting of the dice, you should hold the dice between your thumb and forefinger, and then swing your arm in a pendulum motion before releasing the dice. The dice is shot into an arc and the fewer rotations that the dice make is considered better. With that being said, it is wise not to add any spin on the dice.

Both the dice should be close together as they approach the arc. Dice that move far apart from each other will most likely bounce in different directions when they land – displaying yourself as a novice amongst the more seasoned gamblers.

Ideally, the dice must hit the back wall and bounce on the table or surface. It is not recommended for the dice to have multiple bounces and the perfect shooter will ensure that the dice hits the wall, jumps once on the table, and stops with a fuss.

The shooter always selects the betting amount that they want to wager and has a choice of two betting options ie. pass or crap-out. It’s up to the shooter to offer the other participants odds during the game.

This method will remain consistent after the players have all placed their bets on the options that are the opposite of the shooter’s bet. The shooter has the ability to lower the betting amount if the other participants are unable to cover the starting bet that was selected. Once the shooter has thrown the dice, all bet placing must stop immediately.

Learning The Probability Of Rolling A Specific Number

When mastering the art of how to shoot dice, you will come to discover that some numbers come up more often than others. Out of all the number combinations, 7 is the most likely number that you will roll with a 17% chance of hitting that number – just incredible!

Out of the 36 possible roll combinations between the 2 dice, there are six ways that a shooter can roll a 7 – meaning that you are likely to roll a 7 more often during your gambling session.

The next most popular numbers that are rolled are 6 and 8 – with these numbers being achieved in 5 possible combinations across the sum of the two dice.

Intriguingly, the least likely numbers to be rolled are 2 and 12.

We’ve touched on dice control earlier, and this is so important that it must be reiterated. As a shooter, you must know how to roll the dice correctly and how it should hit the back wall. In Casino Craps, for example, the shooter has to roll the dice in a way where it hits the back wall of the table – or that roll won’t count.

The same principle applies to shooting dice and is why players who choose this street version play against a wall. When holding your dice with both number 3’s upright, it should resemble a V shape – commonly referred to as “set” in the traditional version of the game.

By showing the other participants that you are not doing any tricks to manipulate the outcome, it shows respect and transparency to all players involved.

Make sure not to throw the dice so hard that it repeatedly bounces off the wall before settling. That can hold up the game if the dice goes in all directions and lead to a frustrating experience for all the players. A good technique is to smoothly toss the dice so it hits the surface before bouncing off the wall and settling quickly.

Also, while many players have their superstitions before throwing the dice, make sure not to waste time with your lucky orientations doing ridiculous moves while delaying the game in the process.

When it comes to shooting dice outdoors, the status quo is that the shooter bets that he will pass while the other participants bet that he will crap out.

Since we have already discussed the probabilities of landing certain numbers after your roll, a pass bet will be the best option considering the chances of landing 7. With that being said, it only makes more sense for the shooter to bet big on a pass bet that is more likely to land.

In essence, you should wait until you become the shooter to throw in some big bets with a greater chance of winning.

The Difference Between Shooting Dice and Casino Craps

Although Shooting Dice and Casino Craps are played in almost the same way, there are slight differences between the two games.

With Casino Craps, there’s a table on a casino floor where you are able to place your bets. There is a banker or dealer stationed at the table who coordinates all the bets as well as the game itself. One of the main tasks of a banker or dealer is to focus on the bets being made as that requires immediate attention.

With Shooting Dice, there is no banker or dealer to coordinate the bets or the gameplay. No player assumes the role of a banker or dealer. Moreover, there is no casino table as this game is played outside on the street or sidewalk with a wall as a background. All players rely on that wall to bounce the dice.

Shooting Dice, like Casino Craps, is a great gambling game that enables you to have some fun while outdoors with friends. While playing at a crypto casino may be loads of fun, it’s sometimes great to take a break from online activities and get your entertainment fix in the outdoors.

Make sure to practice your rolls and learn the rules to avoid disturbing the other players with questions and queries mid-game. Although it may appear to be easy rolling dice, it’s a task that must be learned and practiced, especially when you are rolling two dice.

A great way to practice your Shooting Dice game is to enjoy some Craps sessions at established crypto casinos like BC.Game. Getting a hang of the gameplay and betting patterns will go a long way to familiarizing yourself with how to shoot dice.