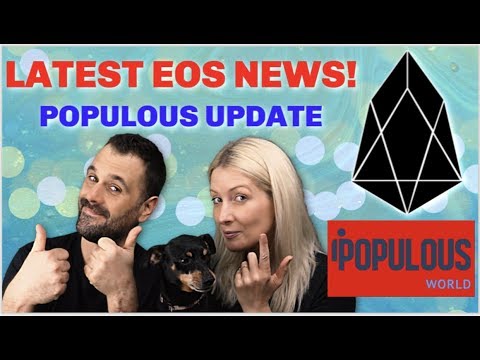 On this weeks show The New Kids On The Blockchain catch up with Rob from Cypherglass for our regular look at what’s going on with EOS, we were out and about to meet up with the guys From Populous to tell us whats been happening with them. We also chat about how we could be heading into an Altcoin season and the latest crypto and blockchain news.

We also have a great giveaway. If you like Digital collectibles and Diamonds,

The crypto community is an opinionated bunch. Everyone has their favorite coin, be it Bitcoin or an altcoin, and investors love to share and defend their opinions with other crypto enthusiasts. They also like to vote, and in a recent poll, it was revealed that the majority of crypto investors are predominantly Bitcoin maximalists, despite thousands of altcoins being available in the crypto market. 68% of Crypto Investors Prefer Bitcoin, Altcoins Are an Afterthought and a Risk

According to Galaxy, since its inception, bitcoin has established a trend of reaching a new all-time high, enduring a steep decline in price, initiating an accumulation, and recovering to a new high. Based on that trend, the trader said that investors will likely never see Bitcoin at $3,000 once again after April.

Developers behind stablecoin Tether (USDT) have drawn scrutiny today, March 14, after social media users noticed they had removed previous claims that the altcoin was fully backed by United States dollars. Tether, which has faced various publicity hurdles over the transparency of its holdings, had de facto guaranteed that each of its USDT tokens had an equivalent 1 USD in the bank. Intended as the opposite to fractional reserve banking, as Cointelegraph reported in December last year, documents had further confirmed the validity of Tether’s backing claims.
Now, however, a new update, date unknown, to its website suggests USD holdings no longer cover the full supply of USDT.

FROM CRYPTONEWS Is Altcoin Season Really Back?

Could altcoins be staging a comeback from the bear run of the past year? This is the new hot topic in the cryptoverse, with one side trying to figure out what’s going on, while another is trying to decide if it’s already too late to profit on the sudden boom among altcoins. In a market analysis piece, senior analyst Mati Greenspan of eToro, a social trading platform, writes that, “Because we’re coming off a particularly harsh winter, we can’t exactly expect conditions to warm up immediately and turn to summer without any transition phase.” On Twitter, he further added: “It’s [altcoin] season. We don’t ask why. Just say thanks and take the gains as they come.”